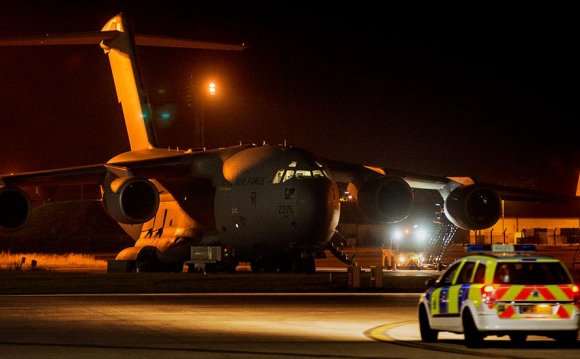 Anne Ramsay is not angry. Well, not any more, at least. The sound of a distant police siren may still rattle her

a little when she is out and about shopping in town but she has at least discovered she still knows how to laugh.

“It’s ironic, ” she says, smiling. “You’d think I was a criminal or maybe someone falsely convicted of a crime I didn’t commit, the way that the sound of a siren can make my heart race. You’d never think an ex-police officer could be stricken with fear just by hearing the sound of other officers going about their job.”

For more than a decade Anne Ramsay enjoyed a distinguished career in the force, one of the few women officers to make it into plain clothes as a detective constable and an officer whose regular appraisals had always earned her highly complimentary comments from her superiors.

Yet what very nearly destroyed her mental health was not the pressure of dealing with savvy criminals, contemptuous youths or the escalating violence on the streets of her home town of Glasgow.

Instead she was invalided out of the Strathclyde Police force with Post Traumatic Stress Disorder, a condition that, according to the force’s own medical expert, her employers had inflicted on her.

Now 37, Anne is coming to the end of a five-year ordeal that saw her struggle through a dreadful final three years in the force and then spend the next two years slowly recovering her health after deciding to take early retirement.

“I loved my job, ” she says.“Yet things got so bad during those final months and years that it was genuinely like Big Brother, a sense of constantly being watched and monitored even at home, even in my time off, because they were looking for something that would allow them to say I was a bad officer.”

Quite clearly being a police officer – and especially a female police officer – in Glasgow in the early Nineties was never likely to be a cushy number. But as her father had said, as he drove her to her first stint at Strathclyde’s police college, she had always had a strong sense of justice even as a child, so it seemed to be the job she was made for.

Over the next decade Anne had her fair share of witnessing the aftermath of horrendous car crashes and callous murders. At one point, she was asked to put her own life on the line by posing as a prostitute at a time when a serial killer was targeting women working in Glasgow’s red light district.

As Anne puts it in her no-holds-barred book about her time in the force: “Sometimes I felt that every possible combination of human misery was wrapped up in police work.”

Yet Anne coped with it all, as most officers do. “I always felt a big part of the job was supposed to be about giving ordinary people the help they needed at terrible times in their lives, so I found the strength I needed to cope, ” she says.

“What I didn’t expect and what I could never have a day off from once it started, was the constant intimidation I felt threatened by, once I had been marked out as a troublemaker.”

Anne had become accustomed to the routine sexism and sexual harassment she encountered all too often among fellow officers – even the superintendent who assigned her to her first posting after training college observed that not only had she done well on the course but also that “you look very petite and pretty in your uniform”.

“Which would have been normal, I guess, in the Seventies but in the early Nineties all that was supposed to be at an end. Still, raw though I was, I guessed that complaining about that kind of thing would only rebound on me so I kept quiet, ” she says.

Even during her eight weeks at the training college, Anne felt herself being forcibly moulded by the institution she had joined and she also felt that there was something more sinister to this process than simply the building of discipline.

“I felt the sergeants drilling us wanted us to understand right away that we had joined not just the police force but the biggest gang in the world, ” she reflects.

It was falling foul of this last “rule” she believes, that eventually led to her being forced out of her job. Eight years into her career she fell in love with a fellow officer, a young man who had come over from Ireland to join the force. The trouble began when Belfast-born Ali, whose family roots were in Yemen, fell foul of a sergeant he worked with.

Ali was the youngest fully-qualified firearms officer on the force – hardly a job for a poorly-performing officer – yet during a routine appraisal this sergeant gave Ali low marks for judgment and communication.

When Ali complained, he found himself being disciplined – “things like estimating in one of his crime reports that it would cost £80 to fix a broken window when the cost would have been nearer £100, ” says Anne – and after a bitter battle with his superiors, eventually he felt driven to resign by what he described as “a wall of lies” that had been built up against him.

He went home to Ireland, he and Anne split up and Anne sank into a deep depression.

“I knew it was only a matter of time before they tried to find a way to get me because I knew what they’d done to Ali, ” she says. For two years she was left trawling fruitlessly over the details of a murder case that was never solved, all the while suspecting that being left in this dead-end was her “punishment”.

Confirmation eventually came with the destruction of her next boyfriend’s career. Again, Ian was a fellow officer and just as her association with Ali had spelt the end of her career, so Ian’s relationship with her blighted his.

He came home one day and said he’d been called in by the Professional Standards Unit – the officers who monitor the force for ‘bad’ cops. “He had been asked if I was taking drugs. He thought it was a joke but was then told not to have anything more to do with me if he knew what was good for him.

“He was horrified, and went to the Police Federation to complain. Shortly before I met him, he had been promised he was going to the Scottish Crime Squad and had been told he was a talented officer with a bright career ahead of him. Suddenly he was facing misconduct charges too. Even now he is on sick leave and suffering from stress.”