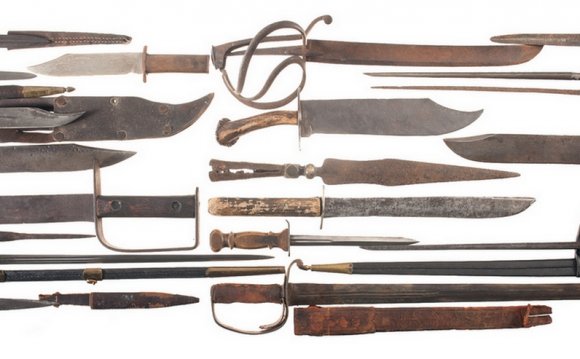 The Civil War witnessed a technological revolution in weaponry. This was highlighted by a changeover in shoulder-fired weapons from smoothbore firearms that had to be loaded through the muzzle each time a shot was fired to rifled-barrel firearms, some of which loaded at the breech. Most of these new rifle-muskets still had to be loaded between each shot, but repeating weapons such as 7-shot Spencer and 16-shot Henry rifles and carbines were developed as well. Unfortunately for the common soldier, tactics did not advance as quickly as technology. Napoleonic linear tactics from earlier in the century now combined with more accurate, faster-firing weapons to result in catastrophic casualty figures throughout the War.

The Confederacy, whose industrial base was far weaker than the Union's when the war began, accomplished a great feat by establishing a viable arms-manufacturing capability in short order. The North's industrial machine also swung into high gear to produce huge quantities of weapons and ammunition. Agents from both the Union and the Confederacy scoured the shelves of European arms-dealers to ensure that their armies had an adequate supply of weapons. Most Confederate infantrymen favored the English-manufactured Enfield.

Although they most often fought on foot—particularly as the War progressed—cavalry units typically looked for firearms that would be easy to reload from the back of a galloping horse. Cavalry in both the Union and the Confederate Armies employed a variety of breech-loading, single-shot, rifle-barreled weapons known as carbines. The carbines, because their barrels were several inches shorter than the rifle-muskets the infantry carried, also had a shorter range. In addition, the cavalry weapons had a brutal recoil when fired, and—despite their advantages in loading—most still required the cavalry soldier to manipulate a tiny cap in order to fire. Confederate cavalry often brought sawed-off shotguns and cut-down hunting rifles from home. Others used the standard infantry rifle-muskets, though the longer barrels were awkward and muzzle-loading was difficult on horseback.