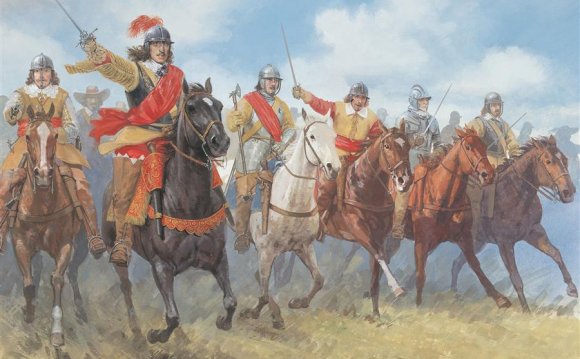 Stuart's horsemen wore chiefly homespun clothing of plain gray or butternut with black facings, or "Hussar's Bars" sewn onto the front of the jackets. The short jackets early in the war were similar to the Richmond Depot Type I shell jacket design, which had epaulets, sleeve trim, and belt loops. Although the traditional trim color for cavalry was yellow, the 1st Virginia wore black-trimmed uniforms instead, including a broad-brimmed black hat, often with a black plume.

Although the traditional wearing of pants was outside the tall cavalry boots, many troopers chose to tuck their pants into their boots for a bit of style. The long gauntlet cavalry gloves were tucked in the belt when not in use.

Since uniforms were subject to wear and damage as the war bore on into later years, one might find the light blue Federal uniform pants being worn by Confederate troops in a "late war impression" as well, taken from the battlefield dead.

Indeed, much of the Confederate equipment was captured from the Union troops. The uniforms were not reissued until 1863. Shirts were a matter of individual choice and style, and colorful calicos as well as white muslin or plain Osnaburg cotton could be seen throughout the war on both sides. The well known "CS" belt plate was not issued to the Army of Northern Virginia, so belt plates from earlier state militia units were often seen, as well as a captured "US" belt plate worn upside-down.

The mechanical sewing machine was available prior to the Civil War, and men's work clothing had been available "off the rack" since the mid-1850s. It is a common fallacy that all Confederate clothing was hand-sewn. While it is true that many uniforms and shirts were entirely hand-sewn by the tailors or ladies of the south or hand-repaired by the individual soldiers, many others were sewn by lockstitch machines. Considerably more information on this subject will be available in our section on Civilians.

The single biggest distinguishing factor of a typical 1st Virginia Cavalryman is the shell jacket with striped facings, or "Hussar Bars" on the front. This reflected the American fascination with European styles in pre-war militia units.

While it may be argued that uniforms eventually wore out and had to be replaced.. and the highly detailed "early war" jacket was an unlikely replacement.. we choose as a standard the original issue style as shown to the left. This follows the Richmond Depot Type I shell jacket design, with black sleeve trim ( square, not peaked ), black shoulder epaulets, and two belt loops on the back ( not shown ).

Although records indicate that Butternut color was also found in the ranks, our standard is gray.

People judge you every day. The first impression is crucial. The way you look and the way you dress is what people notice when they see you for the first time. They will act more friendly and approachable if you dress well. That is why mens designer clothes are not just a whim, but the necessity. Dressing better opens more doors when you meet your potential employer or want to get ready for the date. It works with desk clerks, waiters, and even complete strangers.