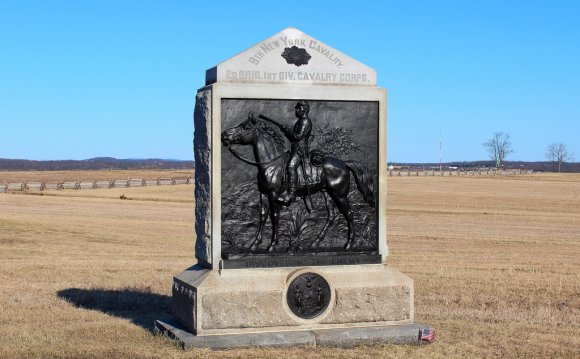 The monument was dedicated on the battle’s 25th anniversary in 1888. It features a bronze relief by sculptor Caspar Buberl depicting a mounted sentinel and titled, “Discovering the enemy.”

The Ninth New York was commanded at the Battle of Gettysburg by Colonel William Sackett. It brought 395 men to the field, losing two killed, two wounded and seven missing. It was assigned to the

The 9th New York claimed that the first shot of the battle was fired by its Corporal Alpheus Hodges, who was in charge of a four man picket post on Chambersburg Pike. But in a controversy that continues to this day, the claim was challenged by the 8th Illinois Cavalry, who held their Lt. Marcellus Jones had the honor. Jones went so far as to erect his own marker on Chambersburg Pike, one of the earliest monuments on the battlefield. The 9th New York successfully defended its claims before the Gettysburg Battlefield Memorial Association at the unveiling of the monument in 1888, and currently the monuments of both regiments claim the honor.

From the front of the monument:

From the rear of the monument:

From around the bas-relief of Colonel Sackett:

From the tablet on the rear: