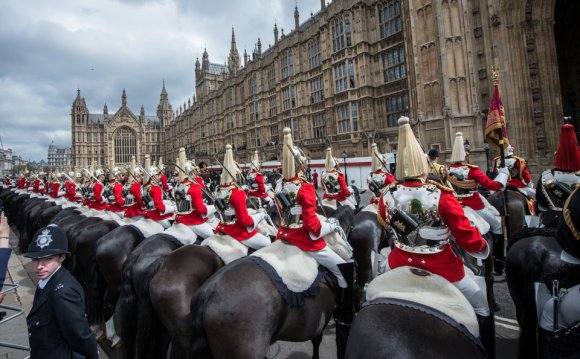 Formed in 1661 under the direct order of King Charles II the Household Cavalry today consists of the two senior regiments of the British Army ? The Life Guards and the Blues and Royals who have two roles:

The Household Cavalry Mounted Regiment, equipped with horses, consists of a Squadron of The Life Guards, and a Squadron of The Blues and Royals who provide 'The Queen's Life Guard' and carry out ceremonial duties, including the provision of the Sovereign's Escort for State and Royal occasions.

The operational role, of the The Household Cavalry Regiment, is in armoured fighting vehicles and they have been involved in Britain's military operations including the Falklands, the Gulf, Bosnia, Kosovo and most recently in Iraq and Afghanistan.

The Life Guards, although not the oldest, is the most senior regiment of the British Army

They were formed by Prince Charles, later King Charles II, when he was exiled at the end of the civil war from loyal followers who traveled with him to Holland.

Since their first action in the Battle of Maastricht in 1672 the Life Guards have won numerous battle honours, including Waterloo, Marne, Brussels and El Alamein.

The Life Guards who always ride black horses, except the Trumpeters who ride greys, wear scarlet tunics and metal helmets with white plumes.

During inclement weather they sometimes wear a long red cloak with a blue collar.

The Blues And Royals

They are the only regiment in the British Army officially known by their nickname, 'The Blues and Royals, Instead of being known as the Royal Horse Guards and 1st Dragoons.

Their battle honours stretch back to Tangiers 1662-1680 and include the Battle of Waterloo where they captured the Napoleonic Eagle of the French 105th Infantry Regiment.

The Blues and Royals wear blue tunics and metal helmets with red plumes. Except for the Trumpeters who ride greys, they ride black horses .

During poor weather they may wear a long blue cloak with a red collar.

The Household Cavalry Museum is situated at Horse Guards, in the heart of historic London.

Horse Guards, dating from 1750 is still the headquarters of the Household Division, where the Household Cavalry has changed the Queen?s Life Guard in a daily ceremony that has remained broadly unchanged for over 350 years.

The museum is not just a dazzling display of uniforms, weaponry and priceless artifacts it is a living museum which provides a behind the scenes look the ceremonial and operational roles of the Household Cavalry.

At the Household Cavalry Museum you can see the troopers, in the original 18th century stables, working with their horses through a large glazed partition. Hear compelling personal stories, first hand accounts of the troopers' rigorous and demanding training.

This may not be one of the largest museums you will find in London but audio guides, interactive displays and the chance to try on the uniform of Her Majesty The Queen's Life Guard combined with collection of stunning rare objects make the Household Cavalry Museum well worth the visit.