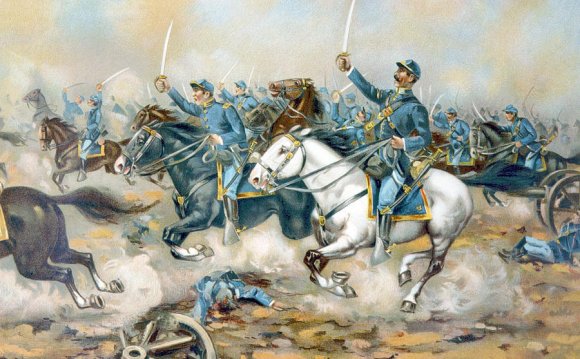 The Gettysburg Campaign is usually considered to be the bellwether campaign of the American Civil War. Many critical events occurred during the Campaign, but few were more important than the maturation of the Army of the Potomac’s Cavalry Corps. Until the spring of 1863, the Army of Northern Virginia’s mounted arm literally rode rings around its Union counterpart. In February 1863, Maj. Gen. Joseph Hooker, the newly appointed commander of the Army of the Potomac, ordered the consolidation of the army’s mounted forces into a single corps for the first time. Those cohesive mounted forces, under competent leadership, could now face their Confederate counterparts on something approaching even terms. That maturation process reached its pinnacle during the Gettysburg Campaign.

On May 15, 1863, Maj. Gen. George Stoneman, the commander of the Army of the Potomac’s Cavalry Corps, took medical leave to seek treatment for a terrible case of hemorrhoids that made every moment bouncing in the saddle a living hell. Brig. Gen. Alfred Pleasonton, his senior division commander, assumed de facto command of the Cavalry Corps. Thirty-nine-year-old Pleasonton, a member of the West Point Class of 1844, had spent his entire military career in the dragoons. He became a division commander in the fall of 1862. Pleasonton had a sharp eye for talent, but was an ambitious intriguer not known for his courage on the battlefield. In spite of these less than attractive traits, Pleasonton left an indelible mark on the Army of the Potomac’s Cavalry Corps that began with the Gettysburg Campaign.

Following the crushing defeat of Hooker’s army at Chancellorsville at the beginning of May 1863, the Confederate high command decided to take the war to the North, electing to invade Pennsylvania to gain a respite for Virginia’s farmers from the harsh realities of the war. Gen. Robert E. Lee’s Army of Northern Virginia began concentrating in Culpeper County in preparation for the invasion. Seven full brigades of Southern horse gathered near Brandy Station, a stop on the Orange & Alexandria Railroad near Culpeper. Their commander, 30-year-old Maj. Gen. James Ewell Brown “Jeb” Stuart, had already earned a reputation as a bold and dashing cavalier. The Virginia-born West Pointer possessed a valuable gift for scouting, screening and reconnaissance, and had already made himself indispensable to Lee as the eyes and ears of the army.

As May turned to June, Stuart held a series of grand reviews of his horsemen, culminating with a review by Robert E. Lee himself on June 8, 1863. Lee inspected nearly 12, 000 gray-clad horsemen and several battalions of horse artillery on the grounds of John Minor Botts’ farm just outside the town of Culpeper. The Army of Northern Virginia’s infantry was scheduled to march north the next day, with Stuart’s horsemen leading the way, scouting and screening the infantry’s advance.

Little did Stuart realize that as General Lee inspected his troops, 9, 000 Federal cavalrymen lay just across the Rappahannock River preparing to attack the following morning. Joseph Hooker, suspicious of the large build-up of Confederate cavalry in Culpeper County, ordered Pleasonton to take the entire Cavalry Corps of the Army of the Potomac out and either disperse or destroy them.

Pleasonton took three divisions of horsemen, two brigades of horse artillery and two brigades of selected infantry (numbering 3, 000 men), and prepared to pounce on the Confederate cavalry on the morning of June 9, 1863.

Pleasonton formulated an excellent plan for his foray across the river. His senior division commander, 37-year old Brig. Gen. John Buford, a native Kentuckian who was a member of the West Point Class of 1848 and a career dragoon, would command the right wing of the operation, including his own First Division and a brigade of infantry. Pennsylvanian Brig. Gen. David M. Gregg would command the left wing, which included the other infantry brigade, Gregg’s Second Division and Col. Alfred N. Duffíe’s Third Division. In addition, several batteries of Federal horse artillery would accompany the columns, adding firepower to the already potent Union force.