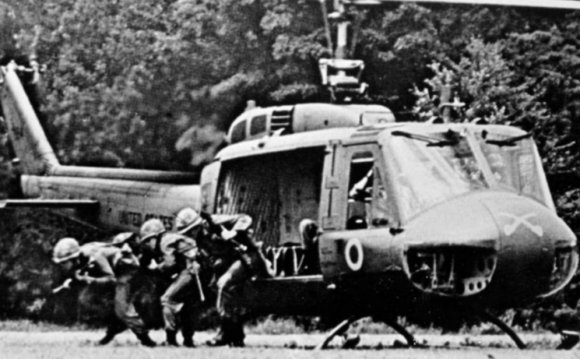 The 9th Cavalry was one of the original six regiments of the regular U.S. Army set aside for black enlisted men. These were authorized by Congress in the act of July 28, 1866 reorganizing the army for post-Civil War service, mainly against native peoples in the West. Colonel Edward Hatch, an officer with no military experience prior to the Civil War but who distinguished himself as the commander of an Iowa cavalry regiment during the rebellion, was the 9th’s first commander. Initial recruiting efforts centered on New Orleans and vicinity. By February 1867, twelve companies were organized and on their way to Texas.

The regiment participated in numerous frontier campaigns, against the Comanche, the Ute, and most notably the Apache between 1877 and 1881. In the early 1880s it also engaged in efforts to restrain settlers seeking to take up land in Indian Territory before that area was legally open. In the 1870s the regiment was involved in the El Paso Salt War and in the 1890s it participated in efforts to restore order in the wake of the Johnson County, Wyoming Cattle War (1892) and railroad labor disputes (1894). Colonel Hatch remained in command until his death at Fort Robinson, Nebraska in April 1889. Forty-four of its soldiers were killed in action during this period, 28 against the Apaches.

Eleven members of the regiment received the Medal of Honor for actions between 1870 and 1890. Sergeant Emanuel Stance was the first in 1870. He was followed by Sergeant Thomas Boyne, Private John Denny, Corporal Clinton Greaves, Private Henry Johnson, Sergeant George Jordan, Sergeant Thomas Shaw, Sergeant Augustus Walley, Sergeant Moses Williams, Corporal William Wilson, and Sergeant Brent Woods. All of the awards were for bravery in combat against Indians, eight against Apaches.

The first black regular army chaplain, Henry Vinton Plummer, served with the 9th from his appointment in 1884 until his dismissal from the service ten years later for conduct unbecoming an officer. Lieutenant John Alexander, the second black graduate of the U.S. Military Academy, served with the regiment from his graduation in 1887 until his death in 1894, as did the third, Lieutenant Charles Young, from 1889 to 1894. Benjamin O. Davis Sr. served with the regiment as an enlisted man and was mentored by Charles Young before receiving his commission in 1901. In 1940 Davis became the first African American promoted to General in the U.S. Army.

The 9th had three men killed in combat at San Juan Hill, Cuba, during the war against Spain in 1898. It also fought in the Philippines between 1900 and 1902, losing two men. The regiment returned to the islands in 1907 and remained there until 1909. It remained on the Mexican border during World War I, except for another period in the Philippines. The 9th was still a horse cavalry regiment when it was assigned to be part of the 2nd Cavalry Division in October 1940. It saw no action in World War II and was deactivated in North Africa in May 1944. Its personnel were transferred to other Army service units.