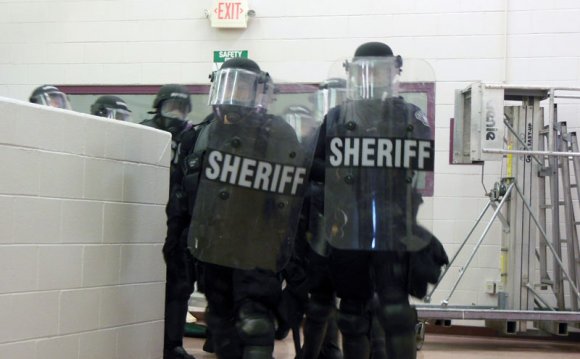 On the night of the recent England v Sweden international football friendly, fans are swarming along Olympic Way, the main route from Wembley Stadium to the nearest underground station. Some are running, others are hooting horns and there's even some half-hearted chanting of football songs. But the police horses, who are spread in a line facing the crowd, stand rock solid with their ears pricked.

Police horse number 65, a dark bay (brown fur with black mane and tail), otherwise known as Lexington, turns his head to get a good look. When people get too close, he nudges them with his nose on their shoulder.

Nevertheless, one man caresses the horse's shoulder then moves on to stroke the knee of Lexington's rider, PC Cath I'anson. She rolls her eyes and says: "We get a lot of that."

The Metropolitan Police has 150 officers and 120 horses at eight stables across London who perform a variety of roles, from high visibility patrolling to appearing at ceremonial functions and carrying out public order duties such as this match. I'anson has been in the mounted branch for six years. She is an instructor, assessing and supervising students on top of her normal duties.

She took a job with a carriage-driving stables but admits that, as with much horse-related work, the pay was terrible and her work-life balance non-existent.

She quit, and went back to college to study a degree in sports science, but missed horses too much and joined the police with the intention of moving into the mounted branch.

"I did two years probation, then a year and a half in the crime squad, " she says. "That was a dilemma – it was taking me down the road to becoming a detective and it was really interesting. Then I applied to the Territorial Support Group and loved every minute."

Nevertheless, the pull of horses was too strong, and "being short I was at a disadvantage. I was generally surrounded by huge men and could never see anything".

Her first football match on horseback, at Tottenham Hotspur's White Hart Lane ground, proved to be a revelation in more ways than one. "I remember thinking, Wow! I can see everything!" she recalls.

In the days before the match, I visit her at the Met's stables in West Hampstead, where she is on the B patrol. This involves arriving at 7am to feed the horses, after which they are left in peace for half an hour. Then the officers muck out the stables, wash out the water and food buckets, groom them and change their rugs.

Most police horses have the hair clipped from their entire body, including legs and heads, to stop them sweating too heavily and losing condition. To compensate, they wear thick rugs to stop them getting chilly.

It's not just the horses that get cold. I'anson says she often feels like the Michelin man in the winter, wearing so many thermal layers under her uniform. On top of this she wears a belt which incorporates her truncheon, CS spray, handcuffs and first-aid kit, and sometimes body armour, too.

A couple of the stables have a second door leading to an outdoor area with toys – yes, there are such things as horse toys – enabling one horse at a time to stretch its legs and relax. The horses are permanently stabled, apart from two weeks every year when they go to the Imber Court training centre in Surrey. Canters across Hampstead Heath or trotting circles on smaller greens are therefore vital for keeping them supple and fit. "We're lucky around here because there's a lot of green space, " says I'anson. "… which helps de-stress the young horses."

Horses typically patrol for nine or 10 miles each day, but that can rise to 16 if escorting the King's Troop of soldiers from their barracks in St John's Wood to the centre of town.

Each stable has a board giving details about its equine occupant – name, colour and behavioural traits. The big chestnut mare called Jeanette, for example, might bite and kick and so needs a double stall in the horse box.

Many come from Ireland where breeding big, athletic horses is a specialism. The 10 at West Hampstead are a mixture of Irish sport horses, warmbloods and Irish draught/thoroughbred crosses, while one named Fred has "a bit of Shire in him".

Lexington, at 16 hands high, or 5ft 3ins at his withers (the high point just before the neck), is considered small for a police horse. Most are around 17hh or more, and tower above me.

Morning stable duties are followed by breakfast and a briefing – details of the route they must take and who to look out for. There's a kitchen for two-legged officers right next to the stables, and as we sit at the table drinking tea, a mouse scuttles across the floor. "Don't tell the men, " she says quickly. "They'll put a trap out."

On the day I visit, the officers are patrolling an area of West Hampstead targeted by burglars. The officers tack up (the tack is cleaned every day – with boot polish on the outside surfaces to get high shine) and paint their horse's hooves with oil (it conditions and makes their feet look smart) before mounting.

"We use oil every day except when we're going to protests and there's a risk of fire, " I'anson says. Lexington is very good with fire, she adds.

The horses have studs in their shoes to stop them slipping, but these seem to have little effect as they slide down the slope from their stables, and the problem is even worse when it snows. "The last two winters have been awful for snow and ice, " she says. "We went out but stuck to main roads for the best part of two weeks last winter."

On the high street, the horses wait in a traffic jam, reluctant to go past an enormous, grinding cement mixer. A couple with a child in a pushchair enthusiastically take photos, and I'anson warns them not to push the child too close in case they get spooked by traffic.

On the previous day, she had been outside the Old Bailey helping to police the student protests, and was on duty from 5am to 9pm. But because of the horse's youth and relative inexperience, Lexington had the day off, and is therefore likely to be quite frisky.

Not that everything always goes according to plan. On one occasion, she and her colleague Sgt Alex Baker had stopped by a restaurant in Camden to chat with diners sitting outside when a message came over the radio asking for an arrest to be made inside. Baker handed his horse to I'anson and went in first. "I asked a security guard to hold both the horses so I could help, " she says. "I told the guard just to be firm with them if they played up."

Having handcuffed the suspect, I'anson went back to call for a van to collect him. "I got outside and couldn't see any horse or security guard – just skid marks on the cobbles."

She followed the marks through the twisting alleyways of Camden Market: "It was heaving with people but no one had seen the horses. My stomach was knotted, just thinking about what could have happened."

Thankfully, she met someone leading Knightsbridge – Sgt Baker's horse – closely followed by Lexington, still loose but looking for his companion. "I got them back to the restaurant by the time Sgt Baker came out with the suspect. He had no idea anything had happened, " she admits.

This sets me wondering: how do you arrest someone if you're on a horse? An incident soon afterwards gives me an insight, when the officers spot a young man they consider suspicious walking along the road.