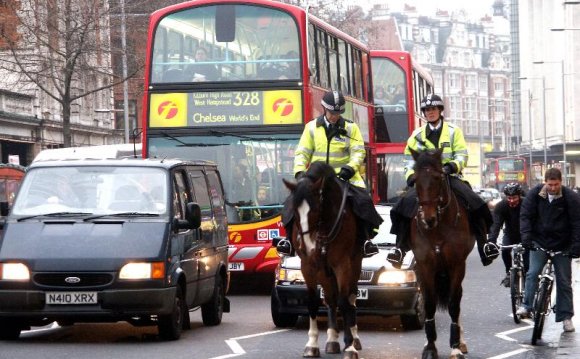 Police chiefs have attacked "despicable, cowardly" protesters who set off fireworks at horses during masked march on Thursday evening.

Four police officers injured during an anti-capitalist march in central London that saw protesters hurl fireworks and set a patrol car on fire have now been released from hospital.

Scotland Yard said at least 50 arrests were made, mainly for public order offences with two for assaulting a police officer, on Thursday night.

In an update on Friday afternoon, the force said the injured officers have been released as it revealed that six police horses were also hurt.

PH Embassy injured after firework thrown at him during protest in #London. Rider taken to hospital with broken wrist

The Million Mask March, organised by Anonymous to hit back at austerity measures and perceived inequality brought about by the Government, started peacefully enough, with songs and chants at Trafalgar Square.

But the demonstration soon turned ugly, with bloodied bodies being tended to by emergency crews as police and mounted officers formed human shields along sections of Westminster closed off to protesters.

Some managed to break free from the main route, heading instead to Buckingham Palace and Green Park, where protesters threw missiles such as cones and fireworks at police horses. One animal bolted as an explosive whizzed past its head.

Clad in Guy Fawkes masks, some of the supporters of Anonymous, the anarchic hacking collective, lit fires and smoke bombs on the streets.

In another incident, a photographer was hit by an Aston Martin that was surrounded by protesters in Lower Grosvenor Place, near Victoria. The man's condition is unknown.

The Met Police Commissioner, Sir Bernard Hogan-Howe, said: "My officers were well and truly in the front line. Fortunately, the four injured officers are doing ok. The most seriously injured was a mounted officer who was thrown from his horse, Embassy, after they had fireworks thrown at them in the Mall.

Horse back Police in London