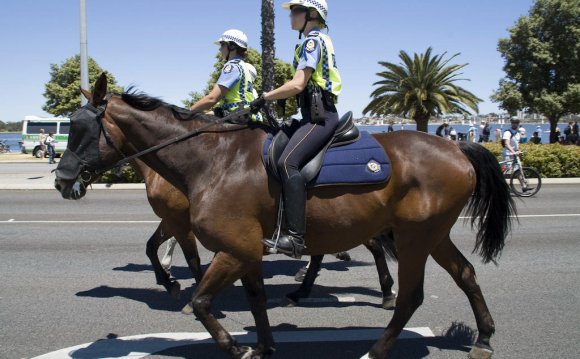 On May 23, 1873 the Canadian Parliament authorized the establishment of the North West Mounted Police Force. Their immediate objectives were to stop the liquor trade among the Indians, halt tribal warfare and attacks on white settlers, collect customs fees, and perform normal police duties. The vast area for which they assumed responsibility was roughly composed of the current provinces of Manitoba, Saskatchewan, Alberta, and the Northwest Territories. In the fall of 1874, the first post was established on the banks of Old Man River and was named for the Force’s Assistant Commissioner, James Macleod.

In stark contrast with the U.S. Cavalry to the south, the North West Mounted Police were soon able to gain the trust of the Indians within their domain. This was exemplified in a testimonial delivered by the Blackfoot in 1877.
“If the police had not come to this country, where would we all be now? Bad men and whiskey were killing us so fast that very few of us would have been left. The police have protected us as the feathers of a bird protect it from the frosts of winter.”

Throughout the remainder of the 19th century the North West Mounted Police continued to bring law and order to the vast Canadian wilderness. Recognition of their outstanding contributions came in 1904 when King Edward VII proclaimed that the prefix “Royal” be added to their name.

By the outbreak of World War I, the Royal North West Mounted Police had grown to 1, 268 officers and men. In 1920 the RNWMP was vested with the responsibility of enforcing all Dominion statutes and its name was changed to the Royal Canadian Mounted Police. Between 1928 and 1950, the RCMP assumed the provincial police duties for all Canadian Provinces with the exception of Ontario and Quebec. Today’s RCMP is essentially a federal police force with responsibilities similar to those of the Federal Bureau of Investigation.

The Horses of the RCMP
The sleek black horses seen in today’s musical ride bear little resemblance to the tough work animals once used by the force to patrol the vast Canadian wilderness. As has happened throughout history, the evolution of the RCMP’s horse to his present form provides graphic proof of the horse’s remarkable adaptability to man’s specific needs.

The Mounties First Horses
One of the first problems confronting the newly formed North West Mounted Police was to obtain and train horses suitable for the rigors of their western duties. Initially two types of horses were selected, the tough western bronco and a primarily Standardbred-type purchased in Ontario. Neither of these horses proved totally satisfactory and so in 1875 the NWMP first began breeding their own horses.
This soon proved to be too expensive and was turned over to private ranchers. By 1889 specifications for the Force’s horses called for; “One standing from 14.3 to 15.2 hands, fine clean cut head, long neck, high chest, broad round quarters with plenty of good flat bone, and strong feet.”

The Horses Today
As the equestrian duties of the Royal Canadian Mounted Police shifted from practical to ceremonial, a need was identified to provide a different type of remount. The result was the reestablishment in 1943 of the RCMP’s breeding program to supply the primarily Thoroughbred-type mares and geldings used in the musical ride.

Since the breeding program began, the RCMP have continued to experiment, introducing the blood of Clydesdales, Percherons, Hanoverians, and Trakehners in an effort to develop a heavier boned, well-mannered, Thoroughbred-type horse. Today’s RCMP mount should be black in color, approximately 16 hands in height, and weigh between 1, 200 and 1, 300 pounds.

The Musical Ride
The origins of the famous RCMP’s musical ride can be traced to the intricate Prussian cavalry drills of the 18th century. The first recorded riding exhibition performed by the NWMP was at Ft. Macleod in 1876, with the first performance accompanied by music presented in 1887. Since 1966 the only RCMP members to receive equestrian training are those associated with the ride.

Iron Horses and the Mounted Police