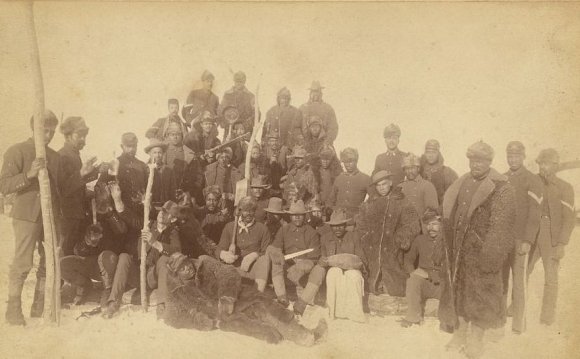 How They Got Their NameStories relating to the origin of the legendary name “Buffalo Soldiers” are as varied as there are people to tell them. Presented here are a few of the most accepted ideas regarding the name. Some attribute it to the Indians likening the short curly hair of the black troopers to that of the buffalo. Another possibility for the nickname was the heavy buffalo robes the soldiers wore on winter campaigns. Others say that when the American bison was wounded or cornered, it fought ferociously, displaying uncommon stamina and courage, identical to the black man in battle.

Motto: “WE CAN: WE WILL”Their adversary, whether Indians, outlaws, Mexican revolutionaries, or gun smugglers, found that the Buffalo Soldiers, like their namesake, could not easily be diverted from their trail. Whatever the reason for the name, the Buffalo Soldier has come down in American military history as one of the proudest individuals of all.

During the 1870-1880’s, the Buffalo Soldier wore a flannel shirt, and a blouse of dark blue with light blue trousers tucked into over-the-knee boots. Also, civil war kepi (hat) adorned with crossed sabers bearing regimental and troop designation. He was armed with a 45-70 Springfield carbine (rifle), a Colt Army .45, (1873 model) caliber pistol and a saber. He was outfitted with a slouch ‘campaign’ hat, black at first and a light grayish-brown by 1874. The Buffalo Soldiers were not issued a neckerchief but generally wore one of his own color of choice anyway. Sometimes yellow more often red or white. These were real necessities, especially for the men riding further back in the column needing protection from the thick clouds of dust kicked up by the front ranks.

Cavalry HistoryThe 10th Cavalry Regiment is one of the unique regiments in U.S. Military history. Moving west from Fort Leavenworth, Kansas, within a year after its activation in 1866, the 10th began its march into immortality. The spring of 1877 marked the beginning of more than two decades of continuous service. Locations like the Great Plains and in the mountains and deserts of New Mexico and Arizona. The challenge was a formidable one. Ten years of near constant campaigning were required before conflicts with numerous Indian nations subsided. Five years would pass before there was peace along the tormented Rio Grande frontier where bands of Indians, outlaws, Mexican bandits and revolutionaries roamed, raided, stole and murdered under conditions nearing total chaos.
Motto: “READY AND FORWARD”

The regiment distinguished itself in Cuba at Santiago and Las Guasimas, and in the famous charge up San Juan Hill. What most people do not know is that the brunt of the fighting was borne by the soldiers of the 9th and 10th Cavalry Regiments. One eyewitness has written: “If it had not been for the Negro Cavalry, the Rough Riders would have been exterminated. The 10th Cavalry fought for 48 hours under fire from Spaniards who were in brick forts on the hill.

Cavalry Scouts and Tankers - US Cavalry