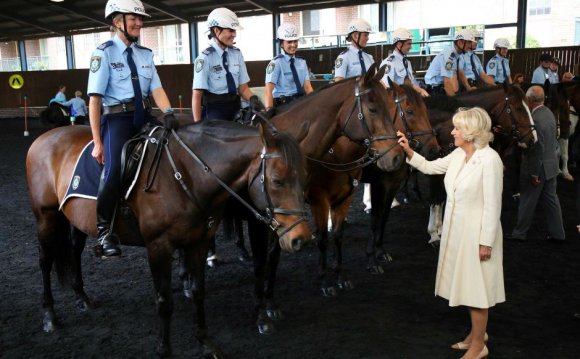 The first body of Mounted Police in Australia was formed by Governor Brisbane on the 7th September, 1825.

After the amalgamation of the various Police bodies throughout the State in 1862, the Headquarters of the Mounted Police was established at the Belmore Barracks, now the present site of Central Railway Station. Then, in 1907, after temporary occupancy of premises at the Sydney Showground, were transferred to the Police Depot, Bourke Street, Redfern. Today, the Mounted Section is the only remaining Police Station in New South Wales continuing Mounted Police, which is the oldest continuous Mounted Police Unit in the world.

The Officer in Charge prefers to select unbroken horses, all geldings, bay in colour, and showing some thoroughbred qualities. The type of horse purchased must stand 15.3 hands, be free of blemishes, have a good intelligent head and be between three and five years of age. Of the 30 horses attached to the Section, there are a number of ex-race horses which have been presented to the Police Force and all have given an excellent account of themselves whilst carving out Mounted Police duties.

A young untrained Police Horse is first, taught to tie up, lead on foot and lead from a horse. His education continues through various stages until he is able to be ridden and walked around with quiet troop horses. Later, he is taken to Centennial Park where, in the company of well trained troop horses, he is taught to drill. During his training, the young horse is taught to walk, trot and canter correctly, to rein back, side passage, and most important of all, to stand still

The basic training of the average horse takes about nine months, divided into three periods, i.e., firstly, to develop his physical power to make him quiet and to teach him to move forward freely; the second phase is to make him balanced and collected and obey the various aids quickly, and the third phase is devoted to training him to go quietly whether in front or behind or alongside other horses.

The new horse is ridden with an experienced horse in traffic around the city and inner suburban areas or any place where he is likely to be used at a later date. The first of official duty of the new Police horse is Street Patrols in the Redfern area.

At present there are 31 personnel, attached to the Mounted Section, and all applicants must pass a test in horsemanship. after completing an induction course at the Police Academy Goulburn, trainees are sworn in as Probationary Constables. They are then assigned to a Patrol Station for 2 years.

Applicants can apply for the assessment riding test after completing 12 months at a Patrol Station.

When Constables transfer to the Mounted Section they are instructed in the care and attention of horses and saddlery, riding skills, equitation and lance drill. All Constables receive Mounted Drill instruction at Centennial Park, which forms the basis of the Musical Ride conducted at the Royal Easter Show and other shows. During their training, Constables receive instruction on basic Mounted Police Duty and Traffic Control.

All constables are responsible for the care and maintenance of their own saddlery and the grooming of their individual horses. In addition to this, they also maintain the cleanliness of the stables. One day weekly is devoted to training of horses and personnel with Instruction given in troop drill, crowd control, escort duty and various equestrian skills as well as police procedures.

The Mounted Police perform Park Patrols in Centennial Park, Hyde Park, The Domain and Mrs. Macquarie’s Chair; and Street Patrols in the Rocks, Millers Point, Kings Cross, Woolloomooloo, Darling Harbour and Redfern areas of the City of Sydney, on a regular basis. Also patrols are carried out in the Suburban areas of Manly, Bondi, Cronulla, Liverpool and Parramatta. All the above patrols are performed during daylight hours and into the evening with the late shift concluding at 1.30am. Patrols are conducted in “pairs”, with both Constables being equipped with Portable Radios. Mounted Patrols have been highly successful because of their mobility and elevation, and involve all areas of Police duties from the arrest of offenders to charging, and subsequent court appearance.

The Mounted Police are available to assist General Duties Police on “Special Operations, in the City of Sydney, Suburban areas and Country areas of NSW. These operations consist of :-