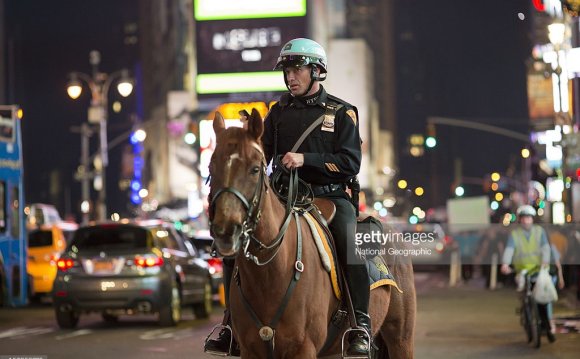 The driver films himself performing a wheelie at 67mph on a central London road. Unbeknownst to him, two mounted police officers lie in wait ahead

On approach to the two uniformed officers, one can be heard telling the driver to turn off his motorcycle's roaring engine.

'Why do you think you've been stopped?' the officer asks, to which the unnamed motorcyclist replies in a foreign accent: 'Because my wheel went a bit up?'

'You're pulling a wheelie and recording it on that (pointing to the driver's helmet).

Claiming he was travelling at 22mph maximum, the driver is then quietened by the officer, a motorcyclist himself.

'Don't give me any of your old flannel. I ride motorbikes, I know what they're capable of.

'Is this still being recorded now? Leave it on, you can show your friends the big telling off you got from the policeman on the horse for clowning around.

'You're going to kill someone else as well as yourself you know.

'If a traffic officer saw that he'd seize that camera, bag it up as evidence and you'd be losing your licence.

'Do I make myself clear? I'm a motorcyclist myself, I know how fast they are so don't give me any of your old flannel.

'Get out of the Square Mile and don't come back.'

Thrill-seeker: The unnamed foreign driver films the exchange on a GoPro attached to his helmet

The video has been viewed more than 117, 000 times since being uploaded to YouTube yesterday evening by the offending driver.

Posting under the name Aimanas Aima, he said: 'Police officers were amazing! So lucky'

He added the speed recorded on his speedometre in the video was not accurate as the motorcycle has 'modification on sprockets'.