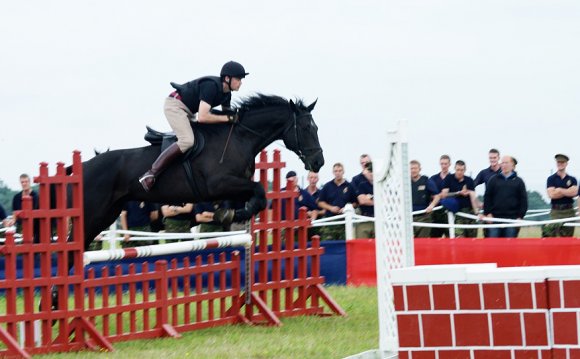 When troops are sent to the Middle East, they don't generally expect an easy ride.

But this time 30 members of the Household Cavalry - and their horses - seem to have landed on their feet - and hooves.

For a group of billionaire Arab sheiks have offered to pay for them to fly to Abu Dhabi and perform for him - at a cost of £250, 000.

The Musical Ride will travel on business-class flights and stay at one of the country's top hotels, at his expense.

And their mounts get an even better deal. The Abu Dhabi Authority for Culture and Heritage (ADACH) has arranged for a specially adapted Boeing 747 jet to take them there.

At their destination, the horses will be put up in air-conditioned stables, with a team of staff to entertain their every whim.

'It looks like the horses are going to get better treatment than we will, ' joked spokesman Captain Michael Fry.

The world-renowned Musical Ride is described as the equine version of the Red Arrows.

It has been a part of the public face of the Household Cavalry for many years, first performing at The Royal Tournament in 1882.

The Household Cavalry Mounted Regiment is comprised of The Life Guards and the Blues and Royals, two of the oldest Regiments in the British Army

Their format is based on a series of cavalry drill movements set to music and has remained largely unchanged over the years.

The team, who are based at the Household Cavalry barracks in Hyde Park, take part in all state occasions, such as Trooping the Colour, and perform at shows around the country.

But they have never travelled outside Europe before and the unit were pleased to receive the invitation to perform at the International Hunting and Equestrian Exhibition in September.

Members of Adach were so taken by the Musical Ride that the group offered to foot the entire bill for their stay.

The trip was approved by senior Army officers, as it is considered an invaluable opportunity to strengthen links between Britain and the UAE.

No payment is being made, although the sheik has promised to make a 'generous' contribution to the Household Cavalry Museum as well as meeting the costs of the trip.

He said: 'This is a huge honour for the Household Cavalry to be invited to Abu Dhabi to perform in such wonderful surroundings and to a whole new and appreciative audience and we are grateful to The Abu Dhabi Authority for Culture and Heritage without which it would not have been possible.'

General Lord Charles Guthrie, The Colonel of the Life Guards and former Chief of the UK Defence Staff, said: 'I know the UAE well. This invitation to one of the UK’s most iconic and traditional Regiments to visit Abu Dhabi, the senior Emirate of the UAE is a demonstration of the deep rooted and positive relationship between the two counties and will act as a bridge between two cultures.'

Abdul Rahman Al Mutaiwee the UAE Ambassador to the United Kingdom said: 'The UAE and the UK have long shared a huge respect for each others cultures and traditions.

'Our Royal families enjoy a passion for the Horse and equine activities. My country looks forward to hosting the members of the Household Cavalry’s Musical Ride.'

The Musical Ride of The Household Cavalry 2011