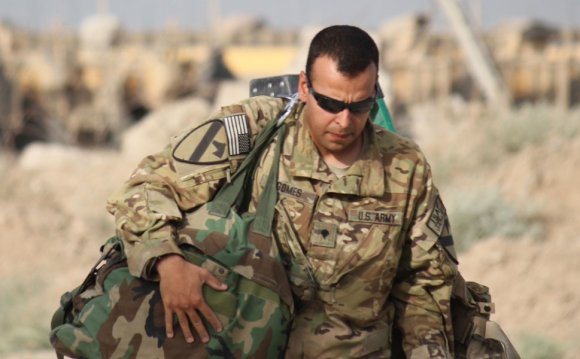 "The holidays are a time for Family and celebration, " said Maj. Gen. Anthony Ierardi, commanding general, 1st Cav. Div. "We can think of all sorts of images for this time of year but it's the sounds, those special unforgettable notes that always get us in the right mood."

The concert, themed "Christmas Through the Years, " drew in the crowds of people. Many Families in attendance joined together to hear favorite holiday tunes, a treat from the 1st Cav. Div. Band to them.

Accompanied by her husband, a Soldier in the 1st Cav. Div., and her daughter, Diana Glynn said she looked forward to hearing the band play.

"I never saw a military band perform and wanted my three-year-old daughter to get a chance to experience the fine arts, " said Glynn. "It's nice to support them and I think this helps build the morale of other Soldiers."

Within the division's concert band, specialty bands, to include brass, jazz, and rock showcased the variety and capabilities of the band by doing their own rendition of holiday favorites.

"This is good for the holidays, " stated Rickey Bell who is retired military. "It's good for people on the installation to have the chance to enjoy a free concert, especially the people that are not able to go out of town for the holidays. Overall this is something good for the community, " added Bell who heard about the concert through the Fort Hood Sentinel.

Throughout the concert, Soldiers donned various costumes to resemble famous singers known for performing specific versions of various themed songs. The crowd interacted by singing along and moving to the beat. The theater known for playing movies for the public, for the time being, had a much different atmosphere.

"We entertain Troops and we do ceremonies but for some of our groups this is the first time they really had the opportunity to play for an audience, " stated Chief Warrant Officer-5 Jeanne Pace, band master and commander of the 1st Cav. Div., band.

Toward the end of the concert, the band dedicated a song to all those who will be separated from their Family and friends during the holiday season.

"That's what we're all about - morale, especially at special seasons like this, to help people kick off their holidays and have remembrances of Family time, " said Pace.

Before starting the song, Home for Christmas, the audience viewed holiday shout outs from the deployed 4th Brigade Combat Team, 1st Cav. Div., who is currently serving in Afghanistan. During the song the reality of the separation of Family and friends during this time of year appeared evident.

At the conclusion of the concert, the band received a standing ovation. With the crowd happily cheering, the hard efforts of the band indeed paid off.

"I think it was a success, " said Sgt. Elliot Chodkowski, a keyboardist assigned to the band. "With the limited time to prepare, I think we executed and made everyone ready for the Christmas season."

The group of Soldiers look forward to performing again next year if their deployment schedule allows for them to do so.

"The band had always been a part of the op tempo. I believe this is the first time in four or five years that there has been a concert on Fort Hood and it turned out really nice, " stated Chodkowski who hails from Buffalo, N. Y.