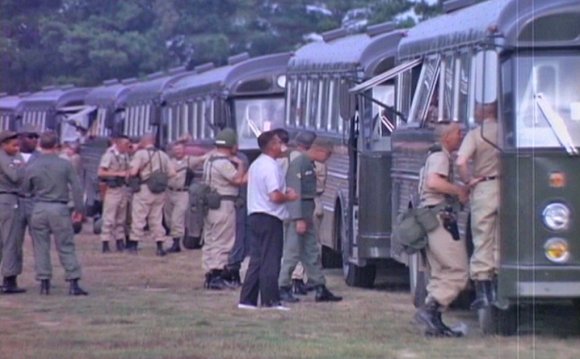 It was not one man's dream; the notion of using aircraft or helicopters as the fast, new steed of modern cavalry. The efforts of many went into the formation of the first air assault division. More than a decade of flying experiments, equipment evaluations and development of new hardware and tactics proceeded the conversion of the 1st Cavalry Division to the Air Assault configuration. Tests were conducted with troop carrying helicopters and those equipped with a variety of machine guns and rockets.

At Ft. Benning, GA., in the mid-fifties, General John R. Tolson developed a tactical doctrine for the use of helicopters in combat and became one of the leading, early pioneers in modern airmobility. Several other military personnel played key roles in development of missions, configurations, and weapons for air cavalry operations. Lt. General James M. Gavin, Chief of Staff for Operations of the Department of the Army, campaigned for helicopter units that could take over, extend and add great speed to the traditional roles of the cavalry.

Soon thereafter, at the Aviation School at Ft. Rucker, Colonel Jay D. Vanderpool assembled a "Sky Cavalry" platoon using borrowed personnel and equipment. The "Sky Cavalry" began giving impressive demonstrations of the roles that helicopters could play in combat. Heralding the era of gunships, the "Sky Cavalry" carried and tested a variety of weapons and rockets.

Additional men and other organizations played vital roles in the development of the "air assault" concept: the Rogers Board, formed on 15 January 1960 and chaired by Lt. General Gordon B. Rogers; the Howze Board, headed by Lt. General Hamilton H. Howze, a man with several significant links with the 1st Cavalry Division; Secretary of Defense Robert S. McNamara and Major General Harry William Osborne Kinnard.

The main mission of the Rogers Board was to review aircraft requirements of the Army in three categories: observation; surveillance and transportation. The findings of the Rogers Board were fine as far as they went, but Robert S. McNamara believed there was more promise in air mobility than the Rogers Board revealed. In the spring of 1962, Secretary McNamara ordered a panel of distinguished military leaders and civilian experts to re-examine the needs of the Army. This panel became known as the Howze Board and it was granted sweeping powers to conduct tests, stage war games and study combat in various areas of the world.

The findings of the Howze Board outlined the requirements for an air assault division. Such a unit would have five times the number of aircraft of a regular division along with an extensive reduction in ground vehicles. After the report was issued, McNamara gave orders to field the air assault concept and run it through its paces in a tough series of field tests which would further reveal the strengths and limitations of an air assault force. The unit chosen for the exercise was the 11th Airborne Division, which was reflagged as the 11th Air Assault Division. It was commanded by Major General Harry William Osborne Kinnard.

The 11th Air Assault Division (Test) was formed in February 1963 as a tactical training and experimental test bed at Fort Benning, GA. At the same time, the 10th Air Transport Brigade was created around an existing aviation battalion at Fort Benning. Most soldiers had little knowledge of helicopters and their potential. Tactics, techniques and procedures had to be created as the division and test bed grew amid daily changes.
Source: www.first-team.us