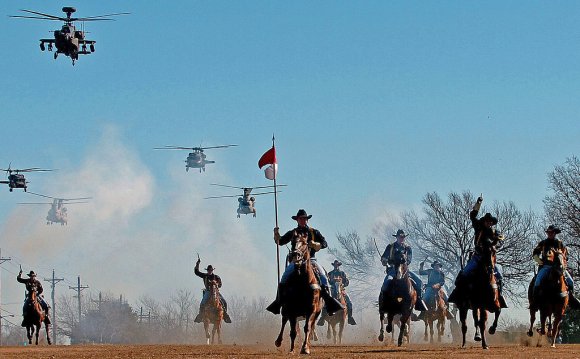 When reorganizing the Regular Army Infantry and Armored Divisions in 1957, under the changing world conditions. several changes were necessary in the force levels to accommodate a reduction of 100, 000 soldiers. In the Far East, the United States agreed to withdraw all ground troops from Japan.

Specifically, as these changes were applied on 15 October, in ceremonies held in Tonggu, Korea, the colors of the 24th Infantry Division were retired and the colors of the 1st Cavalry Division were passed to the Commanding General of the former 24th Infantry Division, Major General Ralph W. Zwicker. "The First Team" had returned, standing ready to defend Korea against Communist aggression. For the 1st Cavalry Division, this type of transformation was the "first" of three major reflagging ceremonies that will occur in its continuing history. Each of which will enable the Division to maintain its long heritage throughout its organizational life and at the same time, enhance its "warring" capabilities.

In parallel with the reflagging, the Division was reorganized with an authorized staff level of 13, 748 personnel structured into five battle groups. Each battle group was a self-contained force trained to conduct independent operations when necessary. Specialized firepower support was provided by artillery and missile units armed with conventional ordnance and nuclear warheads.

The divisional organization composed of five (Pentomic) Battle Groups was developed in 1956 to meet the emerging needs of nuclear battlefields.

The goal was to field highly mobile divisions with great fire power and supported by state-of-the-art communication systems and logistics. In the implementation of the Pentomic structure to the 15 divisions involved, and in most cases only the division names and the "flags" moved, not the personnel and equipment. Most soldiers did not understand the rational, and the unit morale suffered greatly.
Source: www.first-team.us