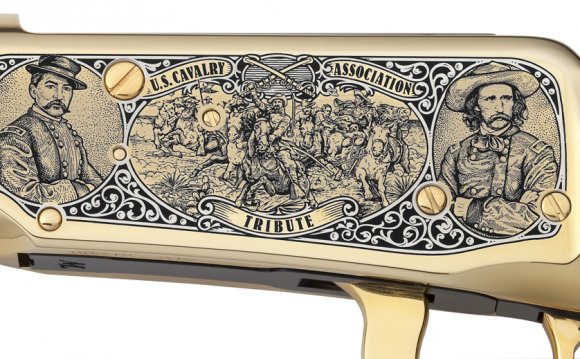 Before the information age, keeping large formations of troops informed was a daunting task. One of the most effective means to relay information quickly became the Bugle, The Bugle could be heard throughout camp or across a battle field. Calls were developed to relay a specific piece of information from mundane day-to-day activities (like wake-up) to critical battle field commands (like charge).

The bugle was first used as a signal instrument in the American Army during the Revolutionary War. The bugle calls evolved from Continental Army contacts with the French and English armies during the Revolutionary War. These two nations have had the most effect on our present system of calls. In the early years of our nation's independence, each arm and branch of the Army developed its own set of "sound signals" - drum beats in the Infantry; bugle calls in the Cavalry and Artillery. By the end of the Civil War the artillery, cavalry, and infantry were sounding bugle calls.

The 2nd US/9th VA Cavalry use the Federal bugle calls of the Cavalry during the American Civil War.

This page is split into two parts. The first being made of calls commonly heard in camp. It steps through the calls starting with the first in the morning to the last at night. The second part is made of calls heard on the field. These calls are designed for maneuvering a unit and commonly heard when on horseback. Each call has a link to a wave file. In addition to a brief description of the call. When ever possible, I have included music and ditties to help jog memories. The intent of this page is to help the troopers familiarize themselves with the bugle calls before getting on a horse. The better we are able to distinguish calls in the field, the better we become.

This call is the first to be heard in camp. It is to assemble all buglers to get the days agenda. It is one of the most recognizable calls. Now, commonly heard at horseracing tracks to call the horses to there starting gates.

One of the longest calls heard at camp and one needed to get out of the tent and report to formation. When the last note is played, everyone should be standing in formation for role call and to hear the days events.

Stable call is used to call troopers to their horses, muck the area around their trusty steed, give their horse hay and feed, pick hooves and groom your mount. Usually called just before or just after breakfast.

A common call at high school football games today. Is used to call troopers to breakfast

Used to call troopers to horse and saddle up.

Called when troopers need to get ready to fight quickly.

Called when troopers need to get on horseback quickly.

Dinner was the main meal of the day usually consisting of beef, potatoes, limited vegetables, soup, plus coffee and bread. Beans were the most common vegetable ration and since potatoes often spoiled, they were dried into a brown, lumpy power. During the summer the soldiers planted company gardens for fresh vegetables. Reenacting dinner is usually much better, with a great deal of help from our true unsung heroes of camp, the spouses. When the "General's" tent is in camp, troopers know they will be eating well. But we must never forget Mammy!

Used to gather the officers of all units in order to dictate the days event for the commander.

Calls on troopers to water their horses

"Tattoo" was the signal for the men to prepare for bed and to secure the post.

End of the day, a call for lights out or to retire

Call used to move out. Usually at the walk.

Used to get your horse into a faster pace

Used to step up a pace in formation

Used to direct the mounted formation into a left hand movement

Used to direct the mounted formation into a right hand movement

Call used to direct the mounted formation to turn 180 degrees

This call is used to disperse troopers into a skirmish line. Can be used both for mounted and dismounted skirmishers

This call is used both for mounted and dismounted formations

Rally on the Officer

This is called to get all the troopers into one position. Usually around the company commander or designate. In the second, we rally on the flag. This is most often heard after a charge to gather the troopers for another charge or for a line of defense.