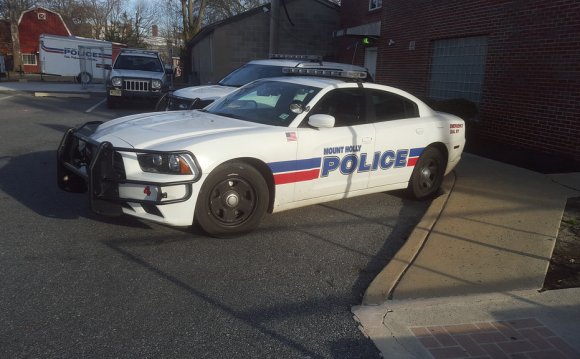 In the 1950's, the residents of Eastampton Township felt that a need for law enforcement existed in the municipality. Consequently, a constable was appointed to work as the township's first "lawman". Phil Crusco, the last constable to work in Eastampton, used his own vehicle and supplied all of his own equipment at the time. On May 31, 1965, the Township Committee of the Township of Eastampton, now known as the Eastampton Township Council, created the first "official" police department within the municipality by ordinance. At that time, the organization was largely composed of part-time police officers appointed to their posts. During a period when the township was mainly composed of rural homesteads and farms, the first part-time Chief of Police was appointed: William "Bill" Clark . Along with Chief Clark were officers Jim Pippin, Charles "Charlie" Craig, and Albert Goldacker. Soon afterwards, Ron Wells and John Hunt joined the force of part-time officers. It was during the 1960's that the township investigated it's first recorded homicide at Emily's Tavern in the Turpentine section of town.

In January 1970, with the departure of Jim Pippin and Al Goldacker for the creation of their own private investigation business, two new officers were brought on to the police department: Gerald Mingin and Edward Hunt, Jr. The appointment of these two officers would be the beginning of a new era for policing in Eastampton Township. When Officers Mingin and Hunt began their duties for the department, which was still part-time, all criminal investigations were handled by the New Jersey State Police since no formal training was really required of municipal officers in the township. Officers primarily handled motor vehicle collisions not involving injuries, complaints of juveniles riding motorcycles in the woods owned by local farmers, and security escorts of the local school buses in town. Dispatched initially from Mt. Holly Township, the part-time police department operated out of a single room at the current location of the police department and operated a 1968 Dodge Coronet that was parked nightly at Chief Clark's residence in Maple Hills Estates. The actual catalyst in the creation of a full-time police department during the early 1970's was the residents' insistence upon the daily school bus escorts. As a result, "Jerry" Mingin was hired as the first full-time police officer and worked 50 hours a week for an annual salary of , 000.00.

June 29, 1973 is a date that greatly impacted the members of the Eastampton Township Police Department. On this date, tragedy was narrowly averted in the confines of the one room police department at 725 Smithville Road. Having increased in size and responsibilities, the police department began to take a more active role in law enforcement in the township. Sgt. Mingin, who had been at the police department completing paperwork from an earlier drug arrest, became involved in a confrontation with a man who came to the police department to "get " the officer that arrested his friend. A physical altercation arose when the man refused to leave the station and an armed standoff soon resulted when the officer lost his gun. He was held at gunpoint with coworker, Detective Dave Biggs, who had also been disarmed. Luckily, Sgt. Mingin was able to depress the police radio microphone at the desk during the ensuing dialogue. As police officers from around the county responded, the suspect shot the officer in the abdomen. After officers stormed the police station, Sgt. Mingin was rushed to the hospital for emergency surgery. Fortunately, he recovered and was later able to return to full duty.

During the 1970's, the second recorded murder occurred in Eastampton. In one of the residential sections of town, a retired military man shot and killed his son after a prolonged drinking "binge". The police department began to grow during the mid and late1970's. Amended in its entirety February 25, 1974 by Ord. No. 1974-1, Chapter 19 of the General Ordinance created a full-time police department consisting of patrolmen, detective-patrolmen, sergeants, lieutenants, a Chief of Police and civilian personnel, that include police radio dispatcher, police physician, clerical, secretarial and administrative employees, school crossing guards and special police officers. The new Chief of Police was John Hunt and officers were now using a 1972 Plymouth Fury. Officers began attending the municipal police academy at Sea Girt and the police department...