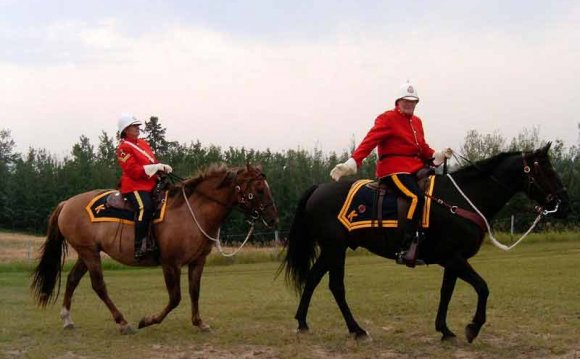 Royal Canadian Mounted Police, with an establishment of more than 20 000, the national force that provides policing in all provinces and territories except Ontario and Québec. The RCMP maintains 8 crime detection laboratories, the Canadian Police Information centre in Ottawa and the Canadian Police College in Regina. There is a large marine section with a fleet of patrol boats and an aviation section with a variety of airplanes and helicopters. Liaison officers are posted in 27 foreign capitals. This large, sophisticated force had small, temporary beginnings. In the late 1860s when Canada was negotiating the acquisition of RUPERT'S LAND, the government faced the problem of how to administer these vast territories peacefully. The Hudson's Bay Co had ruled for almost 2 centuries without serious friction between fur traders and the native population. There were few fur traders and their livelihood depended on economic co-operation with the natives. The company made no effort to govern the native population.

The Canadian takeover meant the imposition of a government that would systematically interfere with native customs for the first time. Thousands of settlers would arrive to occupy the lands where Cree and Blackfoot hunted buffalo without restraint. At worst, the tensions generated by this process might erupt into the kind of warfare experienced in the American West. Apart from the cost in lives on both sides, the Canadian government could not contemplate the expense of a major Indian war, which might easily bankrupt the country. The Canadian government also feared that violence in the new territories might provide American expansionists with an excuse to move in.

Canada in the 1870s, like most other jurisdictions whose legal systems were based on English common law, had few police forces. The larger cities had primitive local constabularies; small towns and the countryside had no police at all. In these areas the burden of maintaining public order fell upon the courts, backed up in emergencies by the military.

The British government had some experience with centralized police forces in India and Ireland, however, and the forces there were unquestionably effective. Prime Minister Sir John A. MACDONALD therefore adopted the Royal Irish Constabulary as the model for Canada. The police for the North-West Territories were to be a temporary organization. They would maintain order through the difficult early years of settlement, then, having served their purpose, they would disappear. In 1869 William MCDOUGALL, sent out as first Canadian lieutenant-governor of the North-West Territories, carried instructions to organize a police force under Capt D.R. Cameron. Half the men of the force were to be local Métis. These plans had to be shelved when the RED RIVER REBELLION of 1869-70 led to the creation of the province of Manitoba, since, under the BRITISH NORTH AMERICA ACT, law enforcement was a provincial responsibility.

Not until 1873, when Ottawa created an administrative structure for the remainder of the territories, was the idea of a police force revived. Parliament passed an Act in May establishing a force, and 150 recruits were sent that August west to winter at Fort Garry; the following spring another 150 joined them. The new police force, which gradually acquired the name NORTH-WEST MOUNTED POLICE, was organized along the lines of a cavalry regiment and was armed with pistols, carbines and a few small artillery pieces. Several reports on the state of affairs in the North-West Territories had stressed the symbolic significance of the traditional British army uniform for the Indians. A scarlet tunic and blue trousers were thus adopted. The commanding officer was given the title "Commissioner."

There was an assistant commissioner and 2 officer ranks, superintendent and inspector; noncommissioned ranks were staff sergeant, sergeant, corporal and constable. The commissioned officers were given judicial powers as justices of the peace. Lt-Col George Arthur FRENCH, commander of the Permanent Force gunnery school at Kingston, Ont, was the first commissioner.

On 8 July 1874 the 300 mounted police left Dufferin, Man, and marched west. Their destination was present-day southern Alberta, where whisky traders from Montana were known to be operating among the Blackfoot. The previous June there had been a serious incident in the Cypress Hills at a whisky trader's post in which several Assiniboine were massacred by whites. After a gruelling march of more than 2 months the force arrived to find that most of the traders had fled. The Blackfoot almost immediately tested the intentions of the police by reporting the activities of some of the remaining whisky traders. The immediate arrest and conviction of the traders pleased Chief CROWFOOT and laid the foundation for good relations with the police. Asst Commissioner James F. MACLEOD with 150 men established a permanent post at FORT MACLEOD. Part of the remaining half of the force had been sent to Fort Edmonton and the rest under the commissioner returned east to Fort Ellice (near St-Lazare, Man), which had been designated as headquarters.

The following summer FORT CALGARY on the Bow River and FORT WALSH in the Cypress Hills were established. In 1876 another major post was set up at Battleford. The network of posts and patrols thus began, and was extended year by year until it covered all of the territories.

For a decade and a half the NWMP concentrated on establishing close relations with the Indians. The police helped prepare the Indians for treaty negotiations and mediated conflicts with the few settlers. Their success is indicated by the signing of treaties covering most of the southern prairies in 1876 and 1877 (see INDIAN TREATIES), by the fact that they rarely resorted to armed force before 1885 and by the small number of Indians who participated in the NORTH-WEST REBELLION that year. Growing unrest in the early 1880s because of the disappearance of the buffalo and crop failures in the Saskatchewan Valley led to an increase to 500 men in 1882. But this did not keep pace with the force's growing responsibilities. CPR construction had drawn the police into a limited role in southern BC as well as the prairies. The police were particularly concerned with the situation in the Saskatchewan Valley and warned Ottawa that serious trouble was certain unless grievances there were addressed. The warnings were ignored and the rebellion took its tragic course. Belatedly the government increased the NWMP to 1000 men and appointed a new commissioner, Lawrence W. HERCHMER, to modernize the force.