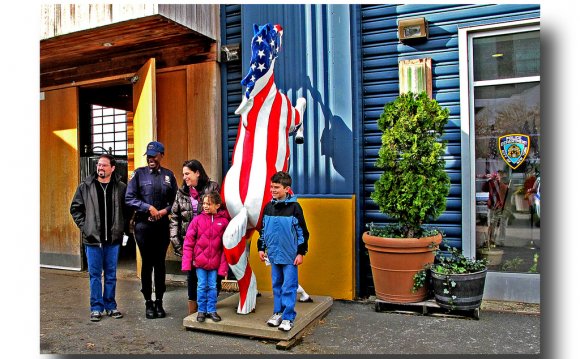 The NYPD Mounted Unit, or police officers who ride on horses, could be called the NYPD’s secret weapon. As is the case with the canine unit, the animals enhance the officer’s ability to do their job. They help them see further down the block. (The officers call themselves “the ten-foot-cops.”) They prevent them from getting snuck up on. They allow them to get a job done faster.

But ‘weapon’ wouldn’t really be the right word. Because the peaceful giants that the officers ride inspire the opposite reaction from a “weapon.” Mostly, the faces of children and adults alike light up with wonder and excitement when they see the mounted unit clomping down their street. And that ability is more potent and beneficial than the horses’ keen senses and size could ever be. So call them the department’s secret “strategy.”

Citywide, there are about 50 officers that are part of the mounted unit. Eight of those officers belong to Troop F, based in Cunningham Park. Depending on where they’re needed, these officers will patrol Forest Park, Steinway Street in Astoria and Citifield, as well as in the Bronx, Manhattan and Coney Island.

At sunrise on a mild December morning, two officers from Troop F, partners John Pell and Derek Ghee, had finished with roll call at the stables and were preparing their horses for a morning ride.

Pell was waiting for his horse Sabre to finish eating before he could tack him up. Sabre was normally a fast – and voracious – eater, so this was unusual.

“The salt bar, meant to be licked, he takes bites out of it, ” Pell said. Indeed, the white brick of salt in Sabre’s stall had a chunk missing from the left corner.

Ghee was facing the opposite direction from his horse, Chief, leaning into his hindquarters with his shoulder and squeezing the horse’s tendon with his right hand so he could use the left to pick clean the underside of Chief’s hoof from dirt and pebbles.

The other horses, like Lucky and Einstein, named for his frizzy white mane, which stuck out in every direction, stood quietly in their stalls. With their tails toward the aisle, they rested their weight on one leg so that their hips cocked to the side. When Pell called their names, they turned their necks coyly to stare back over their hindquarters at the noise, as if they were raising their eyebrows and replying, “What do you want?”

Pell and Ghee ride their horses almost every day and they know their every quirk, as does Jose, who is part of the team to make sure the horses are cared for twenty-four hours a day. When Jose turns Lucky out to pasture, Pell knows exactly what he’s going to do. Roll, fart two times, then gallop and buck. Sure enough, as soon as Jose unclips his halter, Lucky rolls in the dirt, farts two times, and then gets up and gallops around the ring, bucking and occasionally farting as he goes.

When this provokes giggles, Ghee says, “the longer you’re here, you get to see each of their personalities – they are characters. They will keep you laughing all day.”

But when Lucky calms down, the black Morgan mix cuts a spectacular figure as he slows to a trot and glides through the morning mist, his neck arched, ears pricked forward, and his tail flying high behind him.

Ghee is quick to say how much he loves his job.

“I ride horses for a living, ” he says with a tone of wonder and an incredulous smile. “I don’t tell people I’m going to work; I tell ‘em, ‘oh, I’m going to ride my horse today.’”