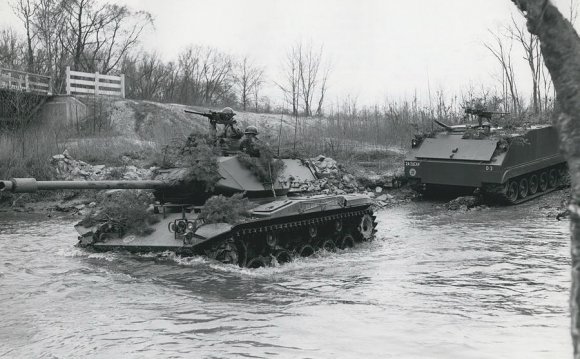 The 4th Squadron, 2nd Armored Cavalry Regiment prior to the transformation and redeployment to Germany was part of V Corps, was located at Fort Polk, Louisiana. At that time, the unit's mission was to deploy on order a Regimental Aviation Squadron (RAS) to conduct reconnaissance, screen and air movement anywhere in the world and be prepared to fight on arrival. It would, on order, conduct joint armed reconnaissance in support of operations, such as Prime Chance. At that time, the Squadron consisted of a Headquarters and Headquarters Troop, 4 troops equipped with the OH-58D(I) Kiowa Warrior, one with the UH-60A Blackhawk, a maintenance troop, and an attached Chemical Company.

The mission of N troop was to rapidly deploy to a designated area of operations and occupy a tactical assembly area, conduct reconnaissance, security, and attack helicopter operations anywhere in the world, be prepared to fight on arrival, and win. N Troop, the Nomads, was an armed reconnaissance air cavalry troop with the focus of being the eyes and ears of the 2d Armored Cavalry Regiment. As a combined arms team, the Nomads conducted reconnaissance and security operations day or night, anytime, and anywhere in the world. This was accomplished with 7 armed OH-58D(I) Kiowa Warrior reconnaissance helicopters. Troop training included working closely with the Regimental Ground Cavalry assets to include air defense units, field artillery, and ground cavalry scouts.

The mission of O Troop was to rapidly deploy to a designated area of operations and occupy a tactical assembly area, conduct reconnaissance, security, and attack helicopter operations anywhere in the world, be prepared to fight on arrival, and win. O Troop provided reconnaissance, target acquisition, and attack helicopter capability to the 2nd Armored Cavalry Regiment (Light). It was equipped with the armed OH-58D(I) Kiowa Warrior. The Air Cavalry Troop in a Light Regimental Aviation Squadron consisted of 3 platoons. These were the Headquarters, 1st, and 2nd Platoons. The 1st and 2nd platoon had 8 OH-58D Kiowa Warriors each and were responsible for maintaining them and conducting missions in support of the Squadron and Regiment. The Headquarters platoon supported the line platoons with food, water, mail and anything else the members of the unit might need to perform their mission.

P Troop, Palehorse Troop, had the primary mission of being the eyes and ears for the Regimental Commander, through reconnaissance and security operations. The unit did this with 8 OH-58(I) armed reconnaissance helicopters. The unit's weapons of choice were the .50 caliber machine gun, and 2.75 inch rockets.

The mission of Q Troop was to, on order, rapidly deploy to conduct reconnaissance, security, and attack operations anywhere in the world, be prepared to fight upon arrival, and win.

The mission of R Troop was to rapidly deploy to conduct air movement operations and airborne C2 anywhere in the world, be prepared to fight upon arrival, and win. Renegade Troop, was a dynamic force multiplier in the 4th Squadron. With its UH-60A Blackhawks, the R Troop provided the Regiment with the capability to rapidly resupply, conduct airborne Command and Control, emplace minefields, and swiftly displace soldiers across the depth of the battlefield.

4th Squadron, 2nd Stryker Cavalry Regiment, the "Sabre" Squadron, had a shared lineage. The Squadron traces its history along 2 distinguished paths. The first is the heritage of the Squadron as traced from what was then called Aviation Company of the 2nd Armored Cavalry Regiment, activated on 23 May 1960 at Nuremberg, Germany. Aviation Company consisted then of O-1 Bird Dog fixed wing aircraft, OH-13 Light Observation Helicopters, and a few radio-controlled drones. The second path was that traced from October 1991 and belongs to the then 4th Squadron, 17th Cavalry Regiment, then located at Fort Bragg, North Carolina.

3rd Armored Cavalry Regiment is returning to Iraq for a ...