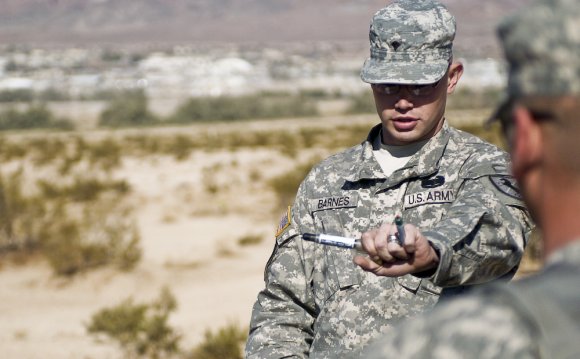 On Jan. 3, 1942, Lt. Gen. Masaharu Homma’s 14th Japanese Army captured the Philippine capital of Manila and was threatening to cut off the strategic retreat of Lt. Gen. Douglas MacArthur’s American and Philippine troops to the Bataan peninsula. To prevent this disastrous possibility, the elite Philippine Scouts were given the dangerous task of fighting a delaying action.

Organized in 1901 and commanded and trained by officers, the Philippine Scouts originally fought rebellious Moros who lived in the southern Philippine islands. By the time of the Japanese invasion, the 12, 000-strong Philippine Scouts had a reputation of being a crack unit.

“Lt. Ramsey in leading his platoon into the battle fought like a hungry tiger. . . .”

Twenty-four-year-old Lt. Edwin Price Ramsey was one of the American officers attached to the Philippine Scouts, serving as the commanding officer of a platoon in the 26th Cavalry Regiment (Philippine Scouts). Born in Illinois, raised in Kansas, Ramsey had graduated from the, where he developed a love for polo. In June 1941, he volunteered for service with the 26th Cavalry because he had heard they “had an excellent polo club.”

Shortly after the Japanese landed in December 1941, Ramsey’s platoon was ordered north, where it conducted vital reconnaissance and assisted in rear guard skirmishes. On Jan. 15, 1942, Ramsey and his troops were looking forward to some rest and relaxation following a demanding reconnaissance mission. But a counterattack was being planned, and because he was intimately familiar with the region, he volunteered to assist in the assault. Then things took a different turn.

Maj. Gen. Jonathan Wainwright, commander of II Corps, wanted to make the Japanese-held village of Moron (now Morong), strategically located on the west coast of the Bataan Peninsula, the anchor for a defensive line stretching inland to the rugged Mount Natib. On the morning of January 16, Wainwright ordered Ramsey to take an advance guard into Morong. Ramsey assembled a 27-man force composed of mounted platoons from the 26th Cavalry and headed north along the main road leading to Morong.

Upon reaching the Batalan River that formed part of Morong’s eastern border, Ramsey’s unit swung west and cautiously approached the seemingly deserted village, composed of grass huts suspended on stilts, with the livestock living beneath the structures. The only stone building was the, located in the middle of the village. At the village outskirts, Ramsey reorganized his force into squads and ordered a four-man point unit to lead them in.

As the point unit approached the village center, it came under fire from a Japanese advance guard that had just crossed the bridge spanning the river. Ramsey saw in the distance lead elements of the main force beginning to ford the river. If the Japanese troops managed to reach the village in force, Ramsey knew that his outnumbered troops would be overwhelmed. Ramsey then decided to do something the U.S. Army hadn’t attempted in more than 50 years – launch a horse cavalry charge against an enemy in war.

Ramsey quickly signaled his men to deploy into forager formation. Then he raised his pistol and shouted, “Charge!” With troops firing their pistols, the galloping cavalry horses smashed into the surprised enemy soldiers, routing them.

At a cost of only three men wounded, Ramsey and his men then held off the Japanese until reinforcements arrived. Ramsey received the Silver Star for his action at Morong. He later fought in the Philippines as a guerrilla, and received numerous decorations. He was discharged in 1946 with the rank of lieutenant colonel. The historic last horse cavalry charge by the U.S. Army was later recreated in the painting “The Last Charge” by John Solie.

Sadly the horses in Ramsey’s unit did not long survive. In early March 1942, with troop rations running low and animal fodder almost gone, Wainwright ordered all horses and mules slaughtered for food. Among the horses was Wainwright’s prize jumper, Joseph Conrad. After issuing the order, adding that Joseph Conrad be the first killed, Wainwright turned away and strode back to his command trailer, his eyes filling with tears.