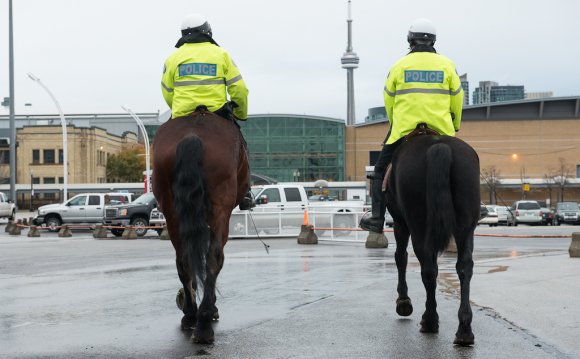 “As I knelt beside her and took her head on my lap she quieted right down. I stayed with her until she passed away at 3 p.m. She died peacefully and I knew that I had lost the best friend I ever had. I loved that old gal and she loved me.”

It was a poignant illustration of the bond between officer and horse when Princess drew her last breath in the arms of Metro Police Const. Tom Frazer in 1966.

Bill Wardle, himself a mounted police officer for almost 20 years, captured Frazer’s account of the moment in his 2002 book The Mounted Squad, An Illustrated History of The Toronto Mounted Police 1886-2000.

The maned members of the unit, which turns 130 next year, have long been revered by citizens as well. (Miscreants on the wrong end of a baton two metres up or fleeing felons outpaced by flying hooves, however, could be forgiven for not sharing that view.)

A mounted police officer helps a lost child find her parents at the CNE in 1929.

In 1886, the year of the mounted unit’s inception, Chief of Police Frank Draper summed up their value after a mob protesting the use of scab labour turned violent during the Toronto Street Railway Strike.

“One mounted man is worth 10 on foot, ” he said after officers on horseback charged the crowd to defuse the explosive situation.

“From that point on, (the unit’s) future was secure, ” Wardle wrote.

Female officers didn’t join the mounted unit until 1986 — 100 years after its inception.

In the beginning, officers were more cowboys than cops, rounding up stray cattle, heading off runaways and patrolling outlying areas.

But labour unrest and rowdy crowds clinched their need.

Three members of the Metro mounted unit, from left, Bert McKeown, John Gill and AI Calderwood, head back to the main Sunnybrook stable in Wilkert Creek Park for lunch in 1979.

The Toronto Daily Star described their actions during another riot in 1902: “Out came their blacksnake whips and they rode into the crowds, slashing as fast as their arms would move. The effect was the crowd swept back like the turning of a tide.”

The outbreak of the First World War in 1914 saw 18 of the city’s best police horses travel overseas for the Canadian artillery’s use. Like the troops, the animals endured horrific conditions in the muck and misery of the front lines. Only one survived, never to return to Canada.

On the city’s mean streets some years later, a horse named Mayflower galloped to a bloody scene as a knife-wielding assailant fatally stabbed an 11-year-old girl on Elizabeth Street before slashing four others.

Equine intervention prevented further tragedy as Mayflower and her partner, Const. Charles Whitford, captured the suspect, according to a Star story about the 1927 event. One witness described the “rearing steed” and arrest of the “demented” man as something out of a movie.

Sunnybrook farm was the scene of busy workouts in 1939, as police worked to accustom mounts to every possible scare in preparation for the visit of King George VI and Queen Elizabeth. Shattering the quiet over Sunnybrook farm were the wailing of bagpipes, the blasting of trumpets and the roaring of a radio, accompanying the waving of flags.

“She’s a wonderful mare, ” Whitford told the Star when the pair were hailed as heroes.

When the four-legged crime fighters spring into action, it’s a testament to their training, which has changed little over the years. “No whips are cracked, no voices raised, over these horses, ” the paper reported in 1937.

But duty is not always as kind.

Whether quelling mayhem at riots or drug-fuelled rock concerts, horses have come under fire from bricks, eggs, paint, ball bearings thrown under their feet and even tulip bulbs dug up by rowdies during a 1970 protest against the U.S. invasion of Cambodia.

In June 2000, eight horses and nine officers were injured when anti-poverty protesters at Queen’s Park hurled rocks and smoke bombs. More pacifistic but no less crazed were the masses of Beatles fans reined in during the group’s three visits to Toronto in the mid-1960s.

A Toronto mounted police officer is surrounded by demonstrators protesting the Vietnam War outside the U.S. consulate on University Ave. in 1968

Encounters with vehicles have proven more deadly. When a beloved Belgian cross named Brigadier died after being struck in a deliberate hit and run in 2006, more than 1, 000 mourners turned out for his hero’s send-off.

Over the years, the unit has been beefed up or downsized depending on social and economic conditions. Ranging from a handful to more than 60 steeds, the squad has been housed in all corners of the city including Casa Loma, Toronto Zoo and Sunnybrook Stables.

While law enforcers maintain nothing controls a crowd better than four long legs and a tail, consultants on a cost-cutting mission in 1982 wanted to reduce horsepower by two-thirds, spurring the newspaper to set up an opinion hotline.

“Star telephone lines were flooded yesterday as hundreds of callers urged the chief to trim his budget anywhere else, but not from the 75-man, 55-horse unit that costs $3 million a year, ” read the followup story. “Save our horses, at all costs, was the nearly unanimous verdict.”

At the same time, news editor Simon Wickens revealed a secret: as a young boy he’d ridden off-duty police horses in Balfour Park. “I don’t mean a policeman walked the horse a few steps while I sat in the saddle, but that a good half-dozen policemen who will go unnamed . . . let me take their mounts and ride them around the ravine bottom, ” Wickens wrote in a personal reminiscence.

Aksel Neilsen and Shani Halfon reacted with delight as they meet police horse Champ at Harbourfront in 1987.

Thanks to the public outcry, horse sense prevailed and the police board backed down on the proposed cuts.

Today, 27 equines, most of which have come from Mennonite farms north of Toronto, are kept at the Horse Palace on the grounds of Exhibition Place, riding herd on the hordes in times of chaos but also serving as ambassadors for the city. If you’re lucky, you might snag one of their “trading cards, ” which officers have been handing out during public appearances since 2004.

Whether they’re performing in musical rides, appearing in parades — Santa Claus and Stanley Cup way back when — or pulling dignitaries in landau carriages, there isn’t a one-trick pony among them.

Const. Gregory John, left, and Const. Richard Cooper ride their horse-partners Brigadier and Spencer respectively through a Tim Hortons on a coffee run. Brigadier, a beloved Belgian cross, died in the line of duty after being struck in a deliberate hit and run in 2006. More than a 1, 000 mourners turned out for his hero’s send-off.